Thoughts on Publishing – The Unboxing of Battle Decks: Multiverse 1953

Guess what my husband and I got in the mail today… the full version of our Battle Decks: Multiverse 1953 card game! Woot! 😀

We unboxed the game almost immediately, and now you can get another sneak peek into Battle Decks (including the cover). We printed the game at The Game Crafter, a site which is little pricey but not bad for print-on-demand games. I was a bit nervous as to how well it would print, but I’m happy with the results, and I’m looking forward to playing our first game with the actual cards. 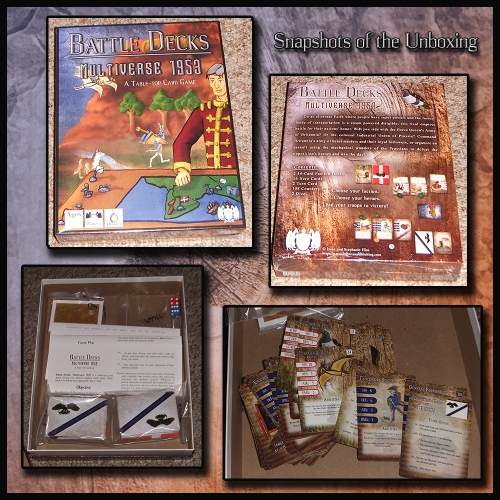 A heads up, if the game looks interesting to you, we will be releasing a free, PDF trial edition which shows you how to play a basic game. A try-before-you-buy sort of thing.

Battle Decks: Multiverse 1953 is a card game Isaac and I will be publishing under our new business, Infinitas Publishing. Isaac created the rules of the game and figured out how the points worked and what the stats should be. I did about half of the card art, minus sketching anything mechanical. Isaac did those sketches. We’re also working on an upcoming blog series called The Multiverse Chronicles, which mentions several of the characters included in the game.