“Stone and String” is Now Available on Multiple Platforms

f you’ve been waiting for “Stone and String” to become available on other platforms, you can rest knowing that the wait is over!

I’ve removed “Stone and String” from Kindle Select and uploaded it to Smashwords, which distributed it across several platforms. Enjoy! 🙂

In the world of “The Wishing Blade,” everyone is born with two strings of magic. One strand is life, and the other is death. Very few can manipulate them.

Among the Cantingen Islanders, children are tested for this ability during their first rites of magic, a ceremony which determines what magic they have and their future as a mage. But when Edyli’s little sister, Akymi, dies in an accident before those rites can occur, Edyli does the unthinkable. She uses magic to return Akymi to the living. As a result, she finds herself in a land of weblike strings… the afterlife.

Edyli refuses to give up seeing her sister’s first rites. With the help of a mysterious immortal and sheer determination, she has every intention of seeing her sister once more, even if it means incurring the wrath of Madia, the goddess of the dead.

Author’s Note: This is an 8,000-word short story based in the universe of “The Wishing Blade” series. Though the stories are related (“Stone and String” takes place at the same time as the events of “Magic’s Stealing”), “Stone and String” stands alone. 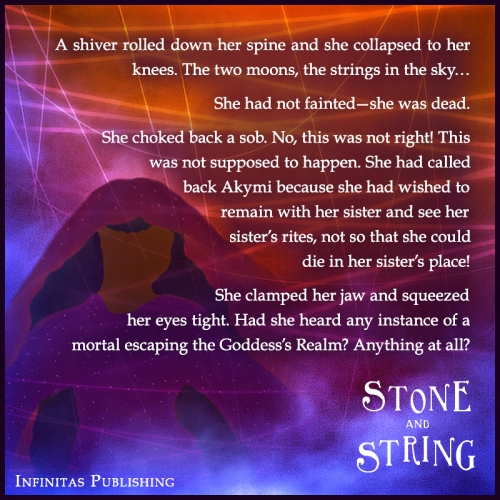