Thoughts about Publishing – Fireworks and Photoshoots 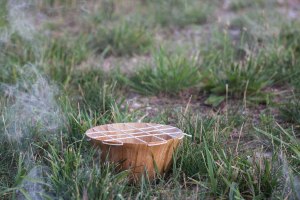 A photograph from our fireworks photo shoot for the book trailer. The ‘scrying bowl’ from Magic’s Stealing.

Over the weekend, my husband and I visited my family for the Fourth of July. Among the things we did… per usual tradition… was to purchase fireworks. In previous years, we’ve typically picked up an assortment of fountains, smoke balls, and sparklers, then headed across town (or recently) up the hill in the evening to watch the fireworks from the city display. Over the years, the people around town have been picking up the big fireworks, so this year we watched them from the front yard. (And I made chocolate chip cookies during the lull… yum!) Anyway, we didn’t find any smoke balls for sale, but we did pick up a couple smoke canisters. The goal? To use the one day we had available to shoot off fireworks in a city area to get potential footage for the book trailer. 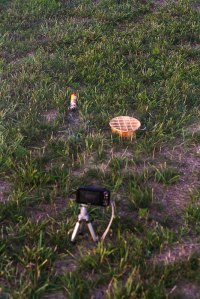 The setup for the 3D camera, ‘scrying bowl,’ and smoke canister.

While we don’t know for certain we’ll use the footage, the shoot was a lot of fun… and very smoky. Me, Isaac, and my dad headed up the hill, scoped out a decent spot for us to lay the bowl and the canister (we brought a couple bottles of water in case the canister didn’t fire properly), along with the 3D camera (it has video capabilities) and the DSLR. I set up the tripod for the 3D camera and kept it low to the ground, then once that was set up, Isaac lit the canister. I shot several still images with the DSLR for potential book cover usage, while Dad kept an eye on what the wind was doing with the smoke. Afterwards, we watered the area around the canisters and set them aside to cool. Dad went back the next day to throw them away. 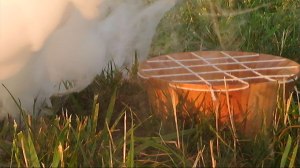 A still shot from the book trailer video shoot for Magic’s Stealing. 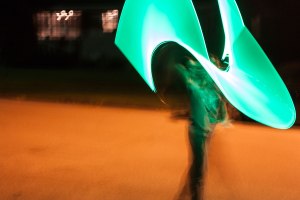 Me having fun with Isaac’s Ultrasaber.

Later that night, I remembered a few photoshoots I’ve done previously using smoke balls and an FX lightsaber (I’m a Star Wars fan). I suggested that we should get a couple more smoke canisters (like Isaac suggested in the first place) and use Isaac’s new Ultrasaber to make long exposure shots. We each got one canister, and we took turns running around in the smoke, trying not to breathe it, to get the various effects. We also shot off a fountain, continued watching the surrounding fireworks show from the neighbors, and played with the sparklers and long exposures to see if we could get any ribbon-like effects for the Magic’s Stealing book cover. We had a lot of fun, and my parents joined in on playing with the sparklers. (We usually take turns lighting the sparklers and twirling them around). And I got poppers. So much fun…you throw them on the ground and they make light and noise… *Happy sigh.* Like my grandma said, “we had a party!” 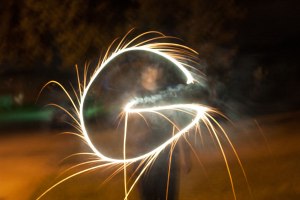 The next day we taped a bunch of streamers left over from party streamers ‘fireworks’ to a fan, then took both video and long exposure shots. We got a lot of abstract images, which are great for creating magical effects for the book cover. 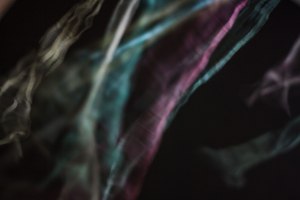 All in all, Isaac and I enjoyed combining our work with play. I hope you enjoyed this post, and I hope you had an enjoyable weekend, regardless of whether or not you celebrate the Fourth. 🙂