When my pet Goldie died while I was in Kidnergarten, it seemed I would never have another fish. At the time, my parents weren’t sure what to do with it (I won Goldie at a fair when I was a Girlscout). We bought it a small bowl, a net, food, and filled the bowl with water. When he kept getting sicker, Mom replaced the water. Little did we know that tap water was the very thing killing that poor fish. He was buried in the backyard with a popsicle cross.

Later I got Patchis, my dog, then Misty, my cat. Of course, when I finally went to college, I couldn’t take them with me. Freshman year and part of Sophomore year I lived at the doorms without pets. Then Christmas Vacation came around and I went to the local Hallmarks. To my utter fascination, there were miniature self-sustained ecosystem that had two African Dwarf Frogs in them. The Hallmarks was going out of business, so everything was on sale. I did some research on these little aqauriums, and decided after a week that I would be returning to the dorms with two new pets.

I picked them up a week before school started again, and I’m happy to say they are still alive and well.

Then, later in the semester, I was at my fiance’s parent’s house. His mother, who loves fish, had a fish that had to be removed from the aquarium because of aggressive tendencies. “You want to take him home, right?” She pointed to the giant jar of water holding our soon-to-be new pet.

I wanted to keep him, and Isaac liked fish. But we already had Revan and T’seutey (From Star Wars and Avatar, respectively), and we didn’t have an aqurium. His mom pointed out that the fish needed to get a new home soon, and we could get a tank for fifteen dollars at Walmarts. She even handed us a dropper full of water-cleaning stuff, a bag of used gravel, and a partially used bottle of fish food.

Semi-reluctantly, we agreed. With one condition from Isaac, my fiance. “I want one of the shrimp to help keep the aquarium clean.” Plus, the ghost shrimp looked cool.

It was settled. We returned home that night, bought a new 1.5 gallon aquarium, a few plants, a couple gallons of spring water, and set up the tank. We dubbed our color-changing fish (Normally a blue-grey, black when angry, and white when scared or content- I haven’t figured out which yet) Malak, and the shrimp Gambit (From Star Wars and our recent fascination, X-Men).

Soon after, the shrimp died, and we went to the pet store to get new bottom feeders (after giving him a proper toilet burial). We got a new snail and two shrimp. We didn’t name the shrimp, for fear of them dieing on us, but the snail was named either Kreia or Dark Helmet. We never actually decided. Eventually the shrimp died, rather mysteriously since they vanished from the aquarium with no explanation (Malak got hungry?) and soon after, the snail followed. It took a while for us to realize he was dead, as research indicated they often liked to float. He was buried outside, and once we saw how dirty the water had gotten, we completely cleaned the tank, boiled the gravel, and recreated Malak’s home. We went and picked up a new snail, who was never named, and he acted much healthier.

A week ago, our snail started showing signs of sickness. Despite changing the water (and realizing the algae was picking up) he passed on. We burried him outside, as well. Befuddled at the inability to keep the smaller creatures, we went to the pet store looking for advice and a new snail. We wound up with a small brown algae eater instead, and the plan to buy a larger tank once we found out the smaller tank’s pH levels were probably too variable.

Frustrated, I went to Walmarts and checked out the prices of their tanks. We needed something bigger, a system that was more stable. I picked up the gallons of water (5 gallons, $5.00), and presented our option to Isaac. We both decided to go with the five gallon tank ($30.00), picked up the rest of the water, came home, and cleaned the gravel. We began setting up the aquarium, only to realize we needed more gravel. So back to walmarts we went, picking up a 5 pound bag of gravel, a set of glass beads for decoration (they also make great minions for table-top role-play)  and a mini bridge for decoration. We transplanted Malak’s old fake plants and found one unused one to put in the new aqaurium. We let it run for a day. Then we picked up the replacement brown algae eater and four ghost shrimp, and floated them in the tank. Finally we released them. After adjusting the filter, everyone swam happily.

So far, they are still alive, thankfully. On the downside- $50.00 to fully replace the tank and get new fish- and we still need to get a new snail. So parents be warned- little kids who get free fish at fairs? It’s not free. And the sons who get a free fish from their mother?

But they are cool.

Below is pictures from the new aquarium: 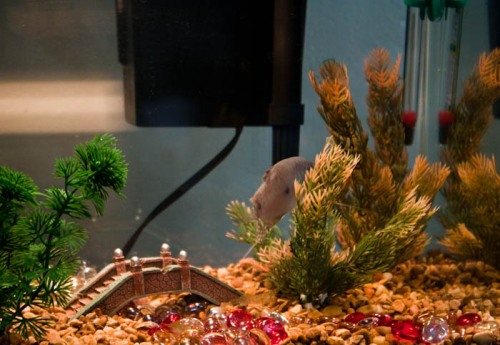