The Wishing Blade: Magic’s Stealing (Book One) – I’ve just about got the print version ready. I’ve gone through the first proof and searched for typos, and one of my beta readers graciously agreed to look through it a (third? fourth?) time, and they pointed out a few grammatical suggestions here and there. I’ve made notes about which changes I plan to implement, and my next step is to apply those changes across the three files (print edition, Kindle edition, and Smashwords edition), then order a proof copy to make sure my formatting is still correct. Shouldn’t take too long, but I don’t want to rush and accidentally botch something.

Also, at the suggestion of my beta reader (and the encouragement of Isaac), I went ahead and polished up the Cirena map. So the print edition should have this map, and once I release the print edition, I’ll also update the ebook editions with it, as well. 🙂 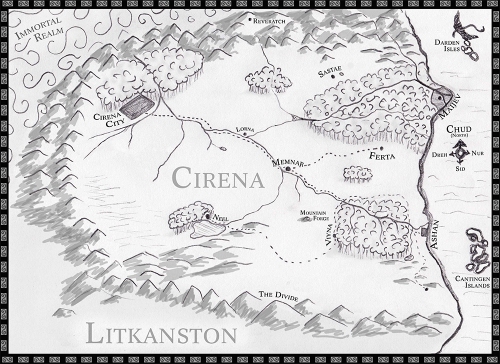 The Wishing Blade: The Shadow War (Book Two)- I’m about where I was last time I wrote one of these reports (*Cringe*). However, my NaNoWriMo goal is not to complete 50,000 words, but to revise the first portion of this book, then finish writing the rest of it so that I can hand this over to beta readers. Let’s see if we can get this story on track.

The Multiverse Chronicles: Trials of Blood and Steel – I’ve given the first thirteen episodes their basic revisions, and I’m currently polishing episode five, including the end scene. In addition, I’ve been sending these off as I finish them to our beta reader for this series, and she’s been giving us good notes that I intend to implement. Then Isaac will go over them one more time to make sure any revisions I made fit with his vision, and afterwards, we’ll start releasing them. The goal is to release the first six episodes at one time, with one episode a week following that. We still need to make tweaks to the Multiverse blog site, and the release has been put on hold until we have our Battle Decks game ready.

In the meantime, Isaac’s NaNoWriMo goal involves writing the rough draft for season two of The Multiverse Chronicles. 🙂

Battle Decks: Trials of Blood and Steel -We’re off schedule on this project. Got the latest proof in, found a few minor edits to tweak, but then we had a friend come over who pointed out a lot of things that could help make the game stronger. As such, Isaac adjusted one hero character card into a basic reinforcement card, brought in a new hero card (he already had the sketch completed, but I need to clean it up in Photoshop and color it). Plus, Isaac’s changed a few stats and abilities on the other cards, and changed what certain abilities actually do. As such, this game is going to be released later than planned. Hopefully next month, if we’re able to get a new proof ordered in the next couple weeks. Not only that, but we’re currently considering offering two editions–one that has dice and tokens and a full, easy-to-read set of rules, and one version which only has the cards and a single sheet of rules (harder to read, but we’ll have the rules available for free online), which should also be a bit easier on players’ pocketbooks.

Phalanx – Won’t be released for a while, but this is a board game Isaac put together based on a game that’s mentioned in one of the Multiverse episodes. Something like a cross between Chess and Tetris. Look for more details in the upcoming months. 🙂

SBibb’s Photographic Illustration – Working through book covers, per usual. Finalizing a couple and working on the proof of another.

Lesson to be learned?

Give yourself plenty of time to complete projects. Count on needing to make more revisions than planned. Come out with a stronger product in the end…

And try not to pull out your hair in the meantime.