Under A Brass Moon – Blog Tour

UNDER A BRASS MOON

A Steampunk and Science Fiction Anthology 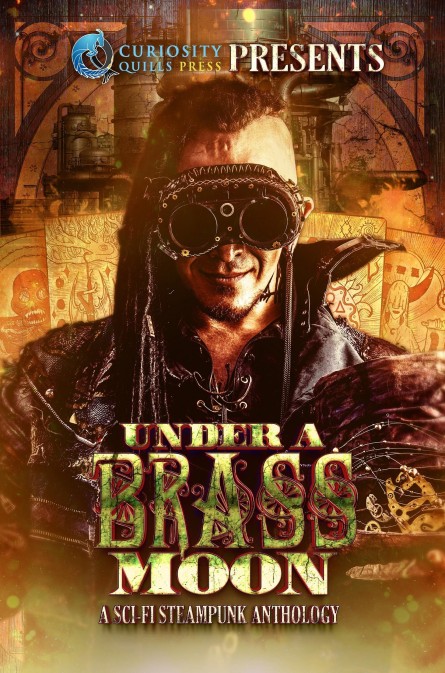 Here are just a few of the amazing stories you’ll find in UNDER A BRASS MOON:

Maiden in the Clock Tower by Jordan Elizabeth: A young woman is trapped in a clock tower to be used as a pawn in an evil merchant’s scheme. Can she escape to her true love?

The Queen of Cobwebs by Jeremy Mortis: Something is hunting people in the foggy streets, and the professor and his assistant are about to meet it.

Vacant by Nick Lofthouse: Where does a dreamer fit into a world where ideas are a finite resource from any one person? Could free thought be our savior, or just a sweet distraction from the inevitable?

Hour of Darkness by Ashley Pasco: Carissa Upton is just your average Victorian street urchin – little does she know that her life is about to change forever. Not only is her entire life a lie, but her future is uncertain.

A Connecticut Yankee in Queen Victoria’s Court by G. Miki Hayden: Engineering professor Dr. Alice Alante doesn’t believe in time travel. But when she’s sent to Queen Victoria’s Windsor castle in a strange machine, her only choice may be to help build a dirigible to defend the crown.

Lucky Escape for Goldilocks Girl by Perry McDaid: On a new world structured to reprise all the patriarchal and elitist notions of the Elizabethan era, a young girl promised to an old but influential suitor chooses to rebel by masquerading as a Knight of the Road … or Highwayman.

Calliope by Terri Karsten: Roscoe Gordon dreams of bringing back his dad’s Steam Calliope, but he’s hindered by a pair of prank-loving ghosts. With their help, will he lead the parade or blow the whole thing up?

The Balloon Thief by Jessica Gunn: Adeline has made a name for herself as Beltham’s Balloon Thief for stealing high-priced jewelry items and leaving only a balloon in their place, setting sail for finer lands on her steam-powered hot air balloon. Adeline has been told the stolen rings and gems open a door on the mysterious Leikei, the temple in the air where she thinks her friend Colin is stranded. On her last robbery attempt, she’s arrested and forced to place her trust in the museum owner’s daughter who has her own reasons for wanting to get to Leikei. If she can trust her, Adeline just might be able to rescue Colin. If not, it might be the end for them all.

Ethereal Coil by S.A. Larsen: A new sin eater’s refusal to do her job of keeping balance between good and evil awakens Wrath, one of the Seven Deadly Sins, endangering those closest to her.

Fritz Finkel and the Marvelous Mechanical Thing by Lorna MacDonald Czarnota: Every era has to begin sometime, and every inventor starts someplace. For Fritz, it is the opportunity to impress the “apple of his eye,” the lovely, unobtainable Greta Spielmacher–the toymaker’s daughter.  Fritz wants to be a toy designer, but he’s the janitor. Will his special toy be the key to winning his lady love?

Henry the Tailor by Grant Eagar: Henry is a tailor and inventor of flying machines. Sophie is an agent for the English secret service. Henry and Sophie live in the alternate, steam powered world of Victorian England. The country is at war with Count Von-Friedrich and his horde of mercenaries. The spies of the count are killing and kidnapping the English scientists and inventors. Sophie’s job is to root out the spies and she uses Henry’s inventions as an enticement.

Talking Metal by W. K. Pomeroy: Five years after piloting a zeppelin to the other side of the world to find the spark, Saskia is on the verge of inventing greatness, but her old professor appears to have beaten her to the patent office, or has he?

The Women of Lastonia by Lorna Marie Larson: Earth’s best team must learn why a distant planet won’t join the Interstellar Alliance. Diplomacy is key, but the closed steampunk society has some primeval ideas on how to treat the fairer sex.

UNDER A BRASS MOON is available now from Curiosity Quills Press.  Grab your copy from Amazon and make sure to check out reviews on GoodReads.

Help us celebrate the release with the chance to win a $20 Amazon gift card.

All winners will be notified after verification of entry at the end of this promotion.  Prizes have been supplied by and the responsibility of delivery are solely that of the author and/or their representatives. Blogs are not liable for non-delivery on the part of the author. No purchase necessary.