I recently received my final beta-reader comments for Magic’s Stealing, and I’ve been making edits (I’ll be doing a cover reveal soon!), but today I’m going to focus on one of the ideas that the beta-reader suggested, which was to include a map of the region.

A lot of fantasy stories include a map of some sort as a way to help readers envision the layout of the land, or the city where the story is taking place. Maps can be used to enhance the feeling of the story (seriously, take a look at the map of Middle Earth) and one article I read suggested that a well-drawn map, which includes elements of the story, can make the world feel more real. It’s sort of like having an artifact from the world itself.

I’ve debated before on including a map, but I originally put the idea aside because I wasn’t sure if I could make it look professional, and also because I didn’t want to lock down the distances before I finished the series.

Then my husband pointed out, having a map would be a good tool for future reference. Not only that, but I wouldn’t have to include it in the first edition of the ebook. I could wait until I release the print edition, then update the ebook at that time.

Anyway, let’s take a look at the steps I’m taking to create the map. I have a rough guide. When I wrote the first draft of this story twelve years ago, I also drew a map in Paint. It’s horribly inaccurate

Original map… made many years ago

My husband suggested that I start by writing down the places referenced in the story, then taking note of their directions and the amount of time it takes to travel from one place to get to another, as mentioned in the story.

So I went through Magic’s Stealing and searched for key phrases related to traveling. Minute, hour, road, travel, east, west… etc. I didn’t include directions within buildings, such as going downstairs. Just the kingdom and the cities.

This is what I found in Magic’s Stealing through a basic search.

Fifteen minutes later, Toranih reached the place of the healers. (From the seer’s cottage, jogging)

In minutes they had left the square behind and pounded into the lower city. (Riding hard on horseback)

“We’re two hours from Viyna. A guard could stop here, and we’d be reasonably undercover…” (At the mountain forge, riding on horseback, not rushing)

They fled into the heavy rain, mud spattering them on the road to Viyna. (From the Covonilayno estate)

…and then stormed through yet another portal into the temple in the northern district of Ashan. (Directions within a large city)

The girl was cold and shadowy, colder than the northern village of Reveratch. (Region layout)

“Go to the northern tunnel. Tell Cafrash to send more of his shadows into the city…” (Directions of a tunnel)

“This is it. Sid-Dreh.”//“What’s Sid-Dreh?”//Siklana pushed Toranih out of the way and squinted at the plaque. “South and west, respectively…” (Cardinal directions in Old Cirenan)

…but many of them used the communal oven in the marketplace that had developed in the eastern side of the city. (Layout of Viyna)

The marketplace brimmed with travelers from Ashan, the eastern port. (Region directions)

The ribbons streamed into the sky, a dazzling array of colors, then fled East, away from the city in a glaring river. (Direction the magic is stolen, from Viyna to the mountain forge)

“…If the Trickster branches into the Islands or crosses the sea to the eastern lands, there is no telling how quickly he could rise.” (Region layout)

Ferta was several days out, even by carriage. (Regional layout)

“…When I’m at the academy, I practice in the forest outside of the city walls.” (Reference to Cirena City)

While I may not want to draw out the tunnels on the main map, having a map may make the tunnels be a little more understandable. At this point, though, I’m seeing potential for some interesting back story. How far out do these tunnels actually extend? As you’ll see in a bit, the distances between cities and towns is much greater than the original map suggests. Do the tunnels extend to other cities? Are there towns or dwellings I haven’t mentioned before? Or do they open in the middle of nowhere?

Anyway, instead of trying to mark out the full range of a city or estate, I’m considering following the lead of a few other maps I looked at, which use a basic symbol to designate the location of a city or important landmark. In order to figure out the rough scale, I’ll need to look up the average travel times of riding horseback or walking, and then place my locations based on that scale.

According to this site: http://www.lrgaf.org/guide/writers-guide.htm horses can walk 3-5 miles per hour, trot 8-10 miles per hour, canter at 15 miles per hour, or gallop at 25-30 miles per hour. Now, keeping in mind that weather, type of horse, and condition of horse will effect speed, let’s go with the idea that we’re talking about a horse with decent stamina and who hasn’t been tired from a lot of riding. And let’s go with the idea that the roads in Cirena are of decent quality, and the map is counting on non-rainy days. A general internet search suggests that a fit person can walk 4 miles in an hour (or 1 mile every fifteen minutes), on relatively flat terrain.

So… now that we’ve got some numbers, let’s look back at the descriptions pulled from the story.

Fifteen minutes later, Toranih reached the place of the healers.

In this scene, Toranih is jogging/quickly walking to the temple. She is in reasonably good physical condition, as she’s trying to train to be a guardsman. I had a hard time finding a single average for jogging, so let’s just say that she’s walking. In this case, she walked a mile to reach the temple from the seer’s cottage. If the temple is supposed to be relatively central in the city, then Viyna may be a couple miles wide.

In minutes they had left the square behind and pounded into the lower city.

The characters are riding hard in this scene, but they are likely cantering instead of galloping due to street layout and rain. At the quoted 15 miles per hour, a quarter of a mile per minute, and let’s say 4 minutes, then they have traveled 1 mile from the courthouse to the lower city.

“We’re two hours from Viyna. A guard could stop here, and we’d be reasonably undercover…”

Here, the characters reached the mountain forge by riding on horseback. They took it easy, probably walking or trotting, which puts us at 3-10 miles per hour. Let’s say they traveled at an average of 5 miles per hour. The mountain forge would be roughly 10 miles from Viyna, or if they had cars and a 60 mph speed limit, ten minutes to drive. Picture someplace that takes you ten minutes to drive to on the highway, and now you have the rough distance. (And the kingdom suddenly feels much smaller).

It was going to be a long week (of traveling through the wood).//Scene break//After a full day of assuring her sister that not only were bandits rare in this forest, but she was protected by two mages and– ahem– a well-aimed knife thrower, Toranih finally led Starlight to the forest edge. The dusty road from Viyna to Ashan wound its way in the distance around the edge of the forest. Though the road was smoother, the route jogged several miles north and was usually filled with travelers, adding almost a week to the trip when a couple days of hard riding through the forest would do.

They’re in a hurry to get through the woods, but it’s been raining and they’re somewhat tired. Let’s say their pace averages a fast walk, at five miles per hour, for seven hours of the day. That’s 35 miles a day, or 175 miles after five days of traveling. According to the narration, the road between Viyna and Ashan that avoids the forest adds a day to the trip, whereas hard riding (when possible), gets them quickly through the forest. Say ‘hard riding’ is 7 hours a day (based on 7.5 hours I read somewhere on the internet…which I don’t remember where now and may not be all that accurate) at 10 miles per hour due to rough terrain, so that would be 70 miles per day, or 140 miles in two days.

If they took the road directly from Viyna to Ashan, instead, then they would be walking 7 hours a day, 4 miles per hour, and let’s go with a full seven days, approximately 196 miles. Granted, if they stop to rest one or two of those days, and that’s been taken into account, then the distance isn’t quite as great.

But I went ahead and plugged 196 miles into Google Maps to get a comparative distance with a road I’m used to traveling, and eeps.

Ranging from 140 to 200 miles wide, that forest is much larger than what I was picturing.

This is why having a scaled map is a useful tool for world building. Even if you don’t give the readers the actual scale, you can figure out relative distances without having them wobbling all over the place.

So, for my test run, let’s say that this forest is 140 miles. I picture the edge of the forest not being too far from Viyna, maybe a quarter mile, and maybe a couple miles from Ashan. For the Cantingen Islands (which are mentioned in the second book as being ‘near’ to Ashan but without a more concrete detail), I went to look at the distances from other islands to a mainland. Miami, Florida, to Bailey Town, Bahamas, is about 55 miles out, according to Google Maps and a trusty ruler.

Let’s say the Cantingen Islands are 60 miles from Ashan.

Now, let’s look at another city…

Ferta was several days out, even by carriage.

Horses trot at 8-10 miles per hour, and I read that a pair of horses pulling a carriage would move faster than the average horse alone, so let’s go with 10 miles per hour. Then 8 hours of riding for 4-5 days, we’re looking at around 320 to 400 miles away.

It doesn’t even fit on my initial map attempt.

Then my husband reminded me that people rarely travel in straight lines. There’s hills, glades, rivers, lakes, avoiding certain unfriendly estates, resting the horses… a number of things that could increase the time, but not the distance.

So I took my current references, redrew a map that actually includes geography, replaced the cities with the scale as a general guide, not rule, and now I plan to check the narration to revise for the updated travel times (or have them be a little more accurate, anyway). I don’t plan for this to be the final version (since it’s missing a few cities and roads), and I probably won’t put this in the ebook.

But it should make a lot more sense than the original version–other than the fact that this map has the mountain forge at 90 miles away from Viyna, which doesn’t exactly work for the story. 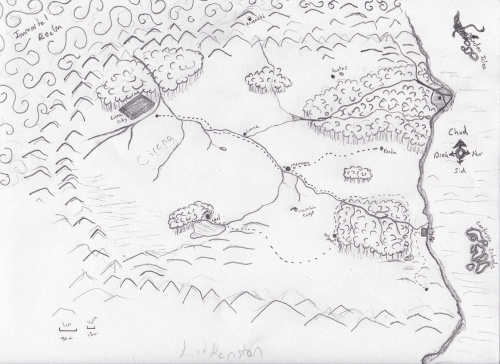 Have you ever tried making a fantasy map? What difficulties have you run into?

4 responses to “Thoughts on Writing – Creating a Fantasy Map”