I am thrilled to announced that Magic’s Stealing is now available for pre-order!

Now, for the moment you’ve been waiting for…

For centuries, ribbons of magic have provided the kingdom of Cirena with light, healing, and protection. Then, in a span of minutes, those ribbons fly from their masters, stolen, save for the magic of a few chosen mages. One of these mages is Toranih, a young noblewoman who would rather have a sword in her hand than use her powers to heal or throw fireballs. As a result, her magic skills are lacking. But with former mages dying from magic withdrawal, and the looming threat of an army of shadows who are impervious to mortal weapons, she must either embrace the responsibilities of a mage or watch her home perish.

This is a 34,000-word novella. Book one of The Wishing Blade series.

Pre-order on Amazon US

In the meantime, you may have noticed that my author photo has changed across several of the sites I frequent. It’s time to reveal the author photo I chose!

The choice was between 1 and 4 (Read the post about author photos here):

It was a tough choice, but I ultimately chose #4, since that picture seemed to convey a quirky, adventurous feeling. You can see the three versions I’ve made for different social media uses. However, I plan to keep the first one around, since it has a nice, professional look to it. 🙂 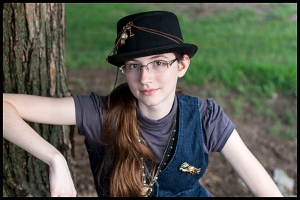 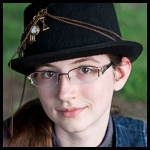 I hope you’ve enjoyed this post. If you like fantasy stories, please pick up a copy of Magic’s Stealing and share the news of its release (September 17, 2015) with your friends. 😀