After an extra month of waiting, The Shadow War is finally here! It’s the second book of The Wishing Blade series, so if you’ve been wondering what happens next, that wait is over!

I’m both excited and nervous with this one. For this one, we get to see Daernan’s point of view for a large part of the story (60%, to be exact), and we get one short scene from Siklana at the end. But don’t worry, Toranih and Shevanlagiy also get their fair share of scenes, too. Not only that, but we get glimpses of both Maijevan and Cantingen cultures, and the bit of rivalry that might be brewing between the various countries and cities. 😉

So, without further ado… 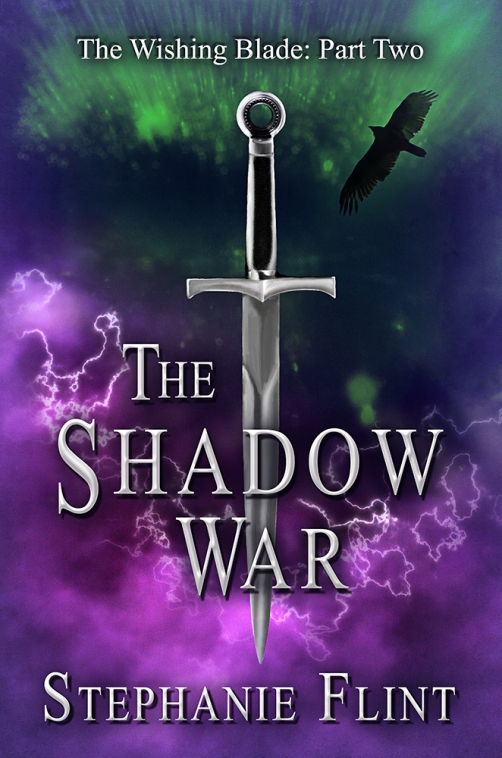 Though a shadow is as good as a ghost, with no free will to speak of, they may still be saved…

The kingdom of Cirena is under attack from an army of shadows—beings who can only be hurt by magic or fire. Magic has been stolen, and as the shadows spread, infecting all they touch, the last two ribbon mages race to the nearest port city to warn them of the impending invasion. One of those mages, Toranih, is among the few who can see the Trickster-cursed army, and she’s determined to get magic back—no matter how much she distrusts it. When she is captured by shadows and a dark secret is revealed about her future, her best friend, Daernan, is left to defend the city. But his only methods of stopping the shadows are by fire and the devastating magic of the shodo’charl.

With the knowledge that the shadows are innocent townsfolk forced to do a warlord’s bidding, Daernan must choose between saving the shadows or saving those who have not yet turned.

The roof afforded a smoky view of the burning courthouse and the surrounding mayhem, and here Daernan understood the madness of the shadows. As their victims faded, turning into shadowy wisps, they, too, turned on the crowd. The more the shadows converted, the faster the crowd disappeared.

No wonder they used the explosions. People in the affected areas fled from their homes and the markets, trying to evacuate because the smoke in the distance meant the whole southern side of the city might be burning. But the ghostly shadows waited for them with impromptu weapons, and the refugees fled right into their hands.

“It’s so easy for them,” Daernan whispered. “Lord Menchtoteale found a simple way to conscript his army.”

Siklana frowned as she dug the shodo’charl free from the bag and passed him the stone. “What are they doing?”

“Using the explosions to force people from their homes.” Daernan reached to take the bundle, then stopped. Siklana’s brown eyes were wide with worry, her lips forming an unhappy frown. He quickly turned away and clasped the oilskin tight in his fingers. There were so many shadows. If he released the stone now, he might be killing countless innocent people. But if he didn’t release the stone’s magic, more would be trapped.

“Should we do this?” he asked softly.

Siklana peered over the ledge. “You’re asking me?”

He whispered a soft prayer to Madiya—primarily because she was responsible for taking the dead through her realm—but he fervently hoped he was wrong. Hoped that somehow, some way, the shodo’charl did not kill them.

He hooked his fingers under the oilskin, trembling, already feeling the cold sweat forming on his neck and soaking his back. To do this . . . if he killed them . . . he wasn’t sure how he was going to sleep. How he was going to account for their deaths? But the longer he waited, the more who would die when he finally released the oilskin.

Enjoy! Feel free to tell your friends, or anyone you think might enjoy the book. 😀