I’m not quite sure where the month went… it feels like I got a lot of stuff done, but I’m not really sure what. I think there was a lot of planning involved for summer. And fighting with UV maps.

And revisions. There was that, too, though that involved less glaring at a set of lines and trying to figure out why they weren’t lined up correctly on the texture side of things.

I’ve highlighted the projects that had changes in blue.

Starless Night: (Book 3 of the Distant Horizon series). My goal for May was to finish the first round of revisions on Starless Night. To achieve that, I set up a project on the NaNoWriMo website (because you can make projects that use the goal structure at times other than November and the camps–sweet!) for editing 100,000 words. That ended up putting my par at roughly 3400 words per day (took about an hour to achieve if I wasn’t stopping to research something).

Good news is that I completed that goal! The first pass of revisions is complete at 125,000 words (97,000 words since the last status report a few days into May).

I managed to write everyday until I finished the goal, so I sort of did it daily (though the site doesn’t show it since I stopped after the goal was achieved before the end of the month), and I also reached my par every day with the exception of one, which was the day after I got my second covid shot.

There are still pieces left to revise: at least three scenes that need to be written and added in, areas that aren’t quite getting the right tone/characterization, and sections that need minor tweaks or research. I left myself notes so that I could find them again and fix them in the next pass.

After that’s complete, I plan to send this out to beta-readers. (It might go through ProWritingAid edits first… not sure yet).

Still, it’s in a pretty good spot. My initial focus in June is going to be polishing The Trial of Bells and Blood. After that, I plan to work on the second pass of Starless Night revisions. I expect that to be a little spotty, however, due to summer vacation and various events. I’m expecting to get more of this done in July.

Changing Tides: (Book 4 of the Distant Horizon series). On hold with a rough draft at 50,000 words.

The Glitch Saga (Distant Horizon spin-off series): Goal is to eventually create a new cover and print edition for the complete collection edition. (On hold).

Galina’s Saga (Deceived) – (Distant Horizon spin-off series): Mostly on hold for the moment. I have a few scenes I know I want to add and adjust in the books I’ve already drafted.

However, the real news here is that, while revising Starless Night, I realized there were some things that should have happened in the Deceived series that would effect how Galina’s group interacts with Jenna in Starless Night. Started plotting what that was so I could keep it consistent…

And I might have come up with an idea for a sixth book in the Deceived series.

I’m not sure yet if this one will be written or if the series will stay complete at book five, but I do plan to outline it to make the next round of Starless Night revisions easier.

Other than that, this series is temporarily on hold while finalizing The Trial of Bells and Blood and revising Starless Night.

In yet other news… I think I might have finally struck on a book cover design for the series that I like and should also be on target for the genre. (Woot!) Hopefully I’ll get that updated sometime this month.

That said, I’m still debating on what the series title should be.

Little One: More notes need to be added into the manuscript before starting revisions.

Runes and Ravens (Stone and String 3): Needs outlining and revision. On hold.

The Secret in the Shadows: (Prequel novella for The Wishing Blade) On hold.

The Legends of Cirena – Collaborative Adventure Facebook Group: Ro’nor-Zynia cross-over is on hold. Current rough draft needs revisions and then I’ll continue with the story in the group.

The Wind Mage and the Wolf (“Livena (The Wind Mage of Maijev”) & Nuaka (“The Gryphon and the Mountain Bear”) cross-over / A Legends of Cirena short novel) : The Joran short story project is on hold while completing the Starless Night revisions and polishing The Trial of Bells and Blood. 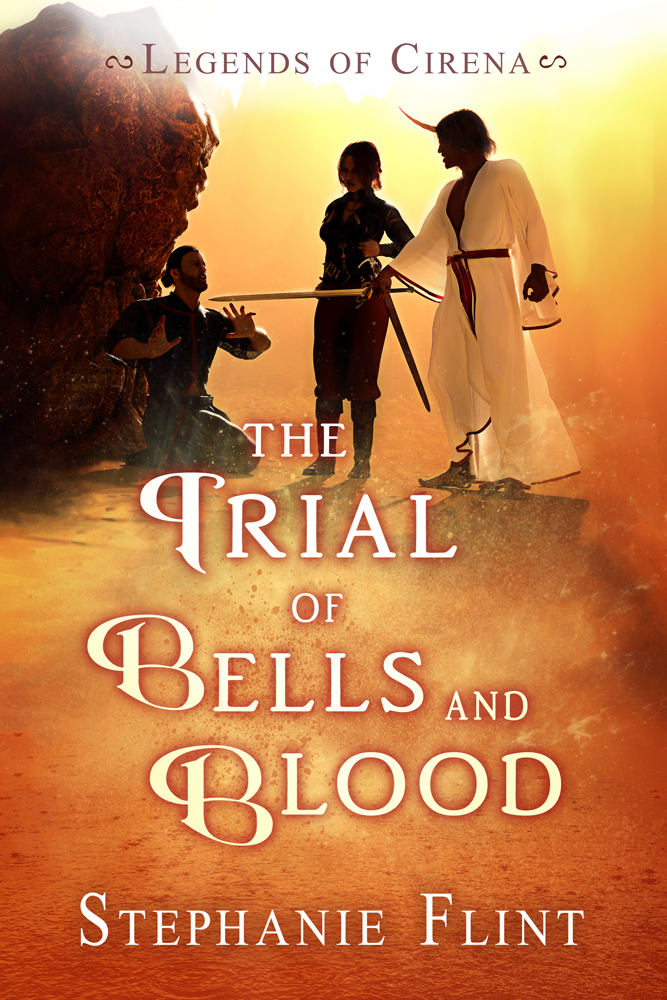 The Trial of Bells and Blood (Hahven (The Cursed Halls of Kalecen) & Alia (The Scars of Her Past) cross-over / A Legends of Cirena novella): This was on hold in May while getting the Starless Night revision pass completed. However, finalizing this is my primary goal for June.

Huntress 3: Needs rough draft completed. (Currently at 25,000 words) On hold. Hoping I might have time in July to finish the rough draft.

Game Design: Isaac really ramped up progress on the card art for the elemental card game. We figured out an art style for the back of the cards (one which uses a mix of 3Delight rendering instead of Iray, paired with Photoshop filters to get an illustrated effect). He got quite a few of those rendered and the illustration effects applied. Still plenty more to do for this, but a large chunk has now been knocked out. We also managed to get in another test run of the game, and the new rule (limiting the amount of shards per card) made it finish in a much more timely manner. Needs more testing, but we’re hoping that’s a step in the right direction.

Plus, after watching an online panel at ConQuest 52, he got some ideas for how he might update the cards for a legacy game and a few different abilities that might work better than what’s currently in use.

Future plans in game design involve taking product shots of the updated Phalanx board for The Game Crafter, and possibly preparing a print-and-play version of Battle Decks.

Space Adventure Comic: On hold until both of us have time to sit down at the same time and finalize panels for episode one.

Marketing: I never did get the weekly book promo highlights set up last month for the blog. (Though they did make it into my newsletters). I did, however, get them set up for this month. I decided to limit the amount of promos I participate in this month more than I usually do, with the idea I can showcase each promo twice (once in each newsletter). We’ll see how that does.

I only did three paid newsletter promos last month, smaller ones, and did see a drop in sales. Not sure yet which ones paid for themselves, but I plan to update the records and examine the results this month so I can decide which ones I want to continue doing and which ones I don’t want to bother with. So far I haven’t set up any new paid promos for this month. That may change once I look over the records.

Future goals: Revise Amazon Ads in general (trim old, non-performing ads and decide whether to start any new ads), update book categories and keywords for the different series, calculate how book promos are doing, and update the business ledger for book royalties (I did get part of this updated).

Other Stories: After watching a ConQuest 52 panel about anthologies, I’m really wanting to write a short story to submit to a magazine or anthology. I realized I might be able to take a couple story ideas in which I have an idea, but not a full-length novel or novella, and explore it that way, especially since those ideas aren’t part of an established universe yet.

Not sure when I’ll try writing those stories, but I do have a parody/humorous dungeon villain scene I’d really like to write…

In the meantime, the YA SciFi Alien Invasion/Dystopian Conspiracy short story revisions are on hold.

SBibb’s Photographic Illustration: I’ve updated the imagery on this blog! Not sure if this is going to be the final version, and I still want to update the side bar, but the new look should be a little more on par with the brand and focus more on the author/artist aspect rather than just SBibb’s Photographic Illustration (which I have geared more toward my Daz PA art).

As a side note, I also got to do a “Success in Creative Writing” presentation with Rebecca Frost, which was fun, and this month I’ll be doing a “Crafting Your Fictional World” panel at the June 12 Writers of Warrensburg online novel-writing workshop. (If you’re interested in writing a novel or honing your writing craft, check it out; it’s free!). Both Stan C. Smith and I will be presenting, and he’ll be talking about time-saving tips for novel writing as well as marketing a series, while my presentation will focus on world-building and incorporating world-building details into your novel. (Writers of Warrensburg is the Missouri writers group I’m part of, that I’ve been able to join in again while the meetings are online).

Daz PA: No new releases from me last month. That said, I have a pose/props set that I’m finally getting close to completing. It’s had some rough learning curves, especially regarding some really problematic UV maps. But I think I got them mostly sorted. I got all the smaller props made now, all the poses and expressions made, and now I have one prop morph to make, thumbnails, expression dials, and promos.

Additionally, I also have the female variant of the Diverse Worlds head morphs that I’d like to complete, but it’s on hold for the moment while I finish the larger project.

Happy writing and reading (Or 3D rendering if you’re into Daz)! 🙂